“Into the Hand of a Woman” (Or, A Well-Placed Tent Peg)

Posted on June 6, 2018 by pastordavesimpson 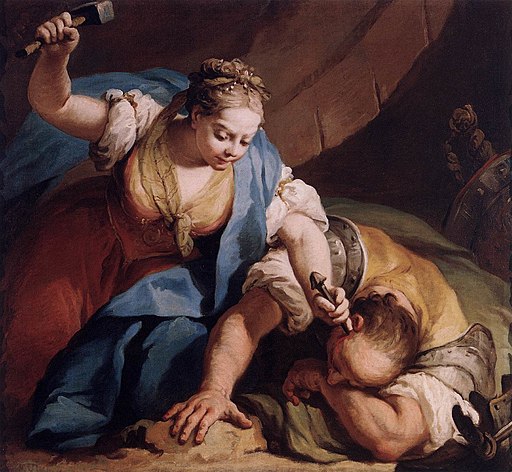 (This is the second sermon in our 10-week Wonder Women of Faith series.  This week’s Wonder Women are Deborah and Jael. Their story is found in Judges 4 and 5, but the reading in worship was Judges 4:1-10. You can listen to a podcast of the sermon here.)

Our story begins with the A-B-C-D cycle typical in the Book of Judges.

A – The people of Israel Abandon God. After the previous judge, Ehud, dies, the people turn again to idolatry instead of God.

B – They are Battered by Enemies – Employing 900 Iron chariots, King Jabin’s army commanded by General Sisera conquers and cruelly oppresses the tribes of Israel for 20 years.

Who will he be?

Surprise! She is Deborah.

Deborah is a multi-tasking woman. I’m sure many women can relate. She’s a wife. She’s a judge – literally. She sits under a palm tree and people come from all over Israel to have her settle their disputes. A woman!

And she’s a prophet – one of fewer than 10 female prophets mentioned in the Old Testament, along with a handful in the New. (You think there were more than that who didn’t make it into the Bible that men wrote and put together? I have my suspicions.)

Deborah – Wife, Judge, Prophet . . . And now deliverer – or at least one of the three deliverers we will meet in this story.

Deborah is truly a Wonder Woman.

God tells Deborah to send for Barak – whose name means lightning. Deborah does what prophets do – she speaks God’s Word to Barak: “Hey Barak. God commands you to round up 10,000 men and go attack King Jabin’s army commanded by Sisera. Remember he’s got lots of troops – oh, and iron chariots, too. (And we don’t have any of those.) But God’s going to give you victory.”

You heard what the real Barak said to Deborah: “I’ll go if you go with me, but if you don’t go with me I won’t go.”

So this man – General Lightning – tells this woman, Wonder Woman that she is, that he won’t go into battle without her.

This story is full of surprises! First a woman in charge and now this reaction from Barak – that’s not how God’s generals in the Bible act.

When I first read this I thought maybe Barak was a little . . . scared if not a lot needy. General Lightning is kind of a mess.

But that might be a little hard on Barak.

I got to reading and thinking about this. What if Barak is actually . . .  kind of faithful? What if he knows and believes God is with Deborah, so it’s not really about taking Deborah herself into battle but rather the assurance of God’s presence?

Whatever the reason for Barak’s request, Deborah says she will go with him. BUT, she says, it will be a woman that ultimately defeats Sisera. General Sisera will be “delivered into the hand of a woman.”

That’s where our reading ended but I want you to know the rest of this story – it’s a good one and it’s hardly ever read or especially preached on or even taught in Sunday School.

How many of you know this story? (A handful of folks raised their hands.)

What happened next is that Sisera heard that Barak and his army were on the move. So General Sisera called together his 900 iron chariots and all his fighting men to meet them in battle. It should have been an easy fight . . . for General Sisera. All those chariots gave him a huge technological advantage.

But Deborah told Barak to attack. She said, “The Lord is going before you!” Barak and his 10,000 men streamed down from the mountains toward the enemy army.

God somehow throws General Sisera’s army into a panic. And it starts to rain. Creeks, streams, and rivers overflow their banks. That makes lots of mud. All those powerful chariots get . . . stuck.

Every single one of those enemy soldiers are wiped out. Except one.

He runs away on foot – not very dignified behavior for such a powerful general.

It gets worse for him.

But Heber the Kenite isn’t home. Only his wife – Jael (remember that name) is there.

Kenites are not Jews. So Jael is both a woman AND a gentile.

Jael invites General Sisera into her tent. Sisera is apparently exhausted from the battle and the running away, so he lies down. He tells Jael if anyone comes looking for him, “Tell them I’m not here!”  Now things turn kind of weird – Jael mothers General Sisera. She covers him up with a blanket. Then he asks for some water, but she opens up a container of milk instead.

And General Sisera, safe and cozy in the blanket and soothed with the milk, falls asleep.

Jael picks up a tent peg and a hammer. She approaches sleeping Sisera. She places the pointy end of the tent peg on his temple.  She raises the hammer . . .

I’ll leave the rest to your imagination.

And that’s how General Sisera was ultimately defeated by a woman.

So who’s the Deliverer in this story? I’d say there were three – Deborah, Barak, and Jael. Two women and a man.

Judges 4 is less Wonder Woman and more The Avengers: Age of Sisera. Israel is rescued by a team of unlikely heroes. Deborah the wife, judge and prophet. General Lightning, the reluctant warrior. And Jael, tent peg assassin.

God uses unlikely heroes to accomplish God’s purposes. God uses people marginalized by their cultures – like Deborah, who would have been considered second-class because she was a woman. Don’t ever think God doesn’t have a plan and a purpose for your life because somebody thinks you are less than them.

The church is a collection of marginalized, flawed, random people. We are God’s version of “The Avengers,” each with our own superpowers like hospitality or teaching or serving or leadership or giving or mercy – gifts of the Spirit to build up each other and the church and to share God’s love in Christ with the world. WE together are called to tell in word and in action the story of God’s deliverance of the whole world – and of the One who saved the world.

Together, Deborah, Barak, and Jael, were the “D” in the Judges cycle. They delivered Israel from King Jabin and Sisera’s oppression. They freed Israel from what were ultimately the consequences of their walking away from God.

We, too, have an unlikely deliverer. He was born as a member of a people who were occupied and oppressed, born to a poor unwed mother and a laborer-father. He became a refugee, and as an adult never had a permanent home. But he saved not just Israel but the world. He saved not from earthly powers but from the power of sin and death and evil.

Jesus is our once-for-all deliverer. His deliverance is eternal.

But the truth is, we still live out that ABCD cycle.

It’s a cycle that makes Judges very frustrating for me to read. It happens twelve times in Judges – 12 times the Israelites Abandon God and then get Battered by Enemies and Cry out to God and get a Deliverer. Then it happens again . .. and again.  It gets more and more aggravating each time.

“Why don’t you learn?!” I want to shout at God’s people. “Just stick to worshipping the God who rescued you from slavery in Egypt and from each time you got battered by enemies. Just stop with the idol worship!”

You know, the things that frustrate us most in other people are the things we see in them that remind us of ourselves.

It drives me crazy when other people procrastinate. (I wrote that line at  5:51pm yesterday.)

This cycle bothers me so much because it’s my cycle.

Things go along great and I get farther and farther from God. I am much less likely to remember to thank God in the good times than I am to plead with God in the challenging times. As I move away from God in those good times, other things fill up my God- space – idols like stuff I want and things I want to do. My biggest idol, the number one thing that replaces God is . . . me.  Myself. I start thinking maybe I’m okay on my own, I don’t need God so much. (Yeah, Pastors fall into this, too.)

Then, as they always do in this life, stuff happens. I am battered by enemies – whether those enemies are health or finances or relationship challenges.

Do you see yourself in that cycle?

We abandon God and turn to our idols, whatever they are – money, power, sports, popularity, success, patriotism, politics, social media – whatever good things we turn to idols because we look to them for peace, love, and joy instead of God, because we look to them for freedom instead of God – when we turn to them it’s not that we lose our deliverance or our freedom we have in Christ – it’s that we can’t experience that deliverance and freedom.

These stories in Judges call us to repentance. They remind us of the consequences of abandoning God for idols, and invite us to turn back and cry out to God.

I'm an unexpected pastor. Why unexpected? Because no one is more surprised than me that I'm a pastor. See the "About" page on my blog for more info.
View all posts by pastordavesimpson →
This entry was posted in Bible, Christianity and tagged Deborah, Jael, Judges 4, Women of Faith Sermon, Women of the Bible. Bookmark the permalink.