Posted on August 8, 2013 by pastordavesimpson

For a few years, a betta fish lived in a bowl on my church office desk.  (“Betta than what fish?” the punsters reading will ask. But I will ignore them for now.)  As a pastor who had to learn New Testament Greek in seminary, I naturally named my betta ΙΧΘΥΣ.  Pronounced “Ick-thus,” ΙΧΘΥΣ is the Greek word for fish. My kids just called him “icky.”

ΙΧΘΥΣ is also an acronym for Ίησοῦς Χριστός, Θεοῦ Υἱός, Σωτή, which means “Jesus Christ, Son (of) God, (the) Savior.”

And that’s why a fish became a symbol of early Christianity.  It has endured a couple thousand years – you of course see lots of cars with the “Jesus Fish” symbol.  It is unfortunate when those who make such a public pronouncement of their piety drive in a way that endangers life, limb, and their license.  Maybe such a driver is saying, “I am so sure that I’m going to heaven I don’t care if I die in a collision I cause,” which may be a powerful faith statement but is pretty counterproductive as Christian witness when you cut off and whiz by cars driven by atheists and agnostics.  But that’s a topic for another time.

As a reaction to the ubiquitous Jesus Fish, those who found it (or Christianity in general) offensive or obnoxious starting putting a variation on their cars, the Darwin Fish:

Note the legs.  I know it’s meant as a knock on Christians and/or Christianity, but I can’t help admire the subtlety with which it communicates its message.

Some creative Christians countered with this:

While this is a somewhat clever response, I have two concerns.  First, it demonstrates the idea it’s trying to disparage, doesn’t it?  I mean, survival of the fittest is sort of embodied in the big fish swallowing the little fish.

My second concern is more fundamental.  The underlying assumption of both the Darwin Fish and the Truth Eating Darwin Fish is that evolution and Jesus are incompatible.  I don’t think that’s correct, and, even it it is, that’s not the argument we need to be having.

As I’ve written before, there is no contradiction between evolution and Christianity.  The important part of the creation story in Genesis 1 are the first four words: “In the beginning, God.”  The Bible is more concerned with Who than how.  Christians can, in good faith, disagree about the how.

We do nothing but make it harder for many folks, particularly educated individuals, to take a serious look at the truth of the Gospel when we imply they have to replace their science books with a Bible in order to be “good Christians.”

Perhaps science books and the Bible can coexist on the same bookshelf.

One of the most profound insights I had in returning to faith was that I did not need to reject science in general, or evolution in particular.  Discovering that there were Christians who believed that God created through evolution was a crack in the door to a relationship with Jesus.

What prompted me to write about this topic again was seeing this new (at least new to me) version of the Jesus Fish online recently:

That’s a fish I can get behind (swim behind?).  It’s a gentle reminder that faith and science are not mutually exclusive.  I believe God created everything, and science helps us understand how amazing that creation is, and therefore to appreciate God even more.

Wikipedia has a page devoted to “Parodies of the Jesus Fish” that include these and other fun fish.  As a nerd, my favorite is the Trek Fish, designed by the son of Star Trek creator Gene Roddenberry.  It’s not pictured on Wikipedia, so here it is, going boldly where no fish has gone before: 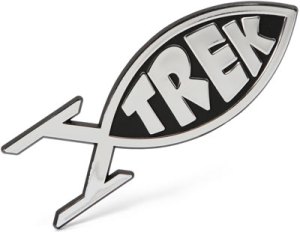 I'm an unexpected pastor. Why unexpected? Because no one is more surprised than me that I'm a pastor. See the "About" page on my blog for more info.
View all posts by pastordavesimpson →
This entry was posted in Christianity, Faith and Science and tagged Darwin Fish, Evolution and Christianity, Jesus Fish, Science and Faith, Trek Fish. Bookmark the permalink.