The Lord Is My Shepherd, I Lack Nothing

Posted on June 19, 2017 by pastordavesimpson 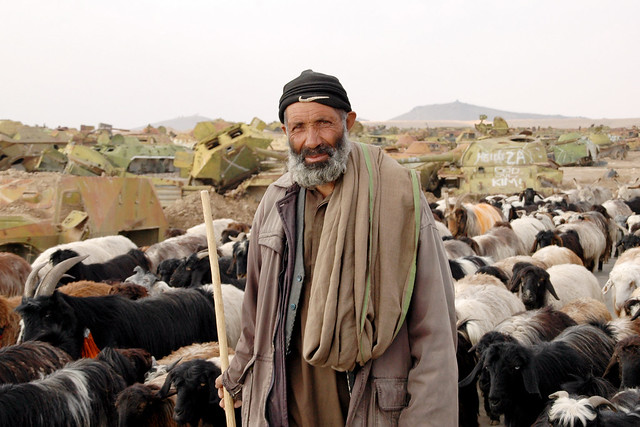 (On Sunday, June 18, I preached about the 23rd Psalm. As I lived with the Psalm in preparation for the sermon, I experienced depth and richness far beyond what I could share in a single sermon. So this week I’ll be blogging on one verse of the Psalm each day.

As I said in the sermon, sometimes we become so familiar with a recitation – the Lord’s Prayer, the Pledge of Allegiance, this Psalm – that we miss the meaning of what we are saying. I invite you to slow down this week as we dig into the verses of this well-known – in some ways perhaps too-well-known – psalm.

I’ll be using the NIV translation. You can find other translations here.)

How about the audacity of the author[1] of the 23rd Psalm? He claims the Lord – the Great I Am, who is and was and will be, who spoke to Moses out of the burning bush and led the people of Israel out of slavery in Egypt – as his personal shepherd. The Psalmist is most likely an Israelite, one of the Lord’s people, but to say “The Lord is my shepherd” rather than “The Lord is our shepherd” seems at least presumptuous.

But the singular pronoun reflects the intensity of the Psalmist’s relationship with God. This psalm is a proclamation not just of God’s nature but also a confession of the Psalmist’s experience of – and with – God. His God is not a mighty but unknowable mystical being off in heaven somewhere perhaps feeling sorry for the Psalmist when things are tough, but rather a personal presence whose love and care abide through the hilltops and valleys of his life.

Shepherds were ubiquitous in the place and time this Psalm was composed. Perhaps the writer himself worked as a shepherd. He would have known from observation or experience the devotion of a shepherd to his flock. According to Wikipedia, sheep live 10-12 years with some breeds approaching 20 years of life. Because sheep were raised not for premature execution for the sake of mutton stew but rather for their wool, they would live out that life span in the care of their shepherds.  Those shepherds would undoubtedly come to intimately know and maybe even become attached to members of their flock.  Each of those sheep depended fully on the shepherd for food and water and protection.

Sheep are quite helpless on their own.

Our judgment of the Psalmist’s audacity will be tempered when we realize the logical extension of his metaphor.

If God is his shepherd, then he must be a sheep.

One of the most popular and enduring Christian summer camp songs is “I Just Wanna Be a Sheep.” The profound lyrics of the chorus proclaim:

The verses declare things I don’t wanna be – a Pharisee (they’re not fair you see), a Sadducee (they’re so sad, you see) before returning to the enthusiastic affirmation of the desire to be a sheep.

Except, who really wants to be a sheep?

Sheep are stupid.  A sheep will put its head down in pursuit of tasty green grass and get separated from the herd. On their own, they end up lost, injured, and finally eaten. Better to be predator than prey, right?

Who wants to be helpless and vulnerable and . . . worst of all, dependent! We live in a pull-yourselves-up-by-your-bootstraps culture. “I don’t need anybody” is a declaration to be admired like the so-called self-made man (or woman) on the pedestal who utters it.  “Needy” is a pejorative for both those who are impoverished and those who could use a shoulder to cry on.

Like Herbie the Elf and Rudolph the Red Nosed Reindeer  in the classic Christmas special, we want to be in-de-pen-dent.

The 23rd Psalm is a Declaration of Dependence. The Lord is my shepherd. I am a sheep.

Not only does the Psalmist profess total reliance on the Lord, but there is also an implicit confession of community. The apparent singularity of “The Lord is my shepherd” is repudiated by the social character of the flock.

God gives me everything I need. “I lack nothing.” In the context of the shepherd/sheep metaphor, that includes community.

The Psalmist makes it clear that “I lack nothing” because the Lord is my shepherd. Everything I have, everything I am, is a result of God’s loving care.

“I lack nothing,” or in more the more traditional rendering, “I shall not want,” does not imply or promise that I have everything I want. God is a shepherd, not a genie in a lamp. We struggle to separate our wants from our needs. We stress and strive for the things we believe will make us happy. Just one more purchase or experience and we’ll be there.

Acquisitiveness only leaves us ensnared in a consumerist version of Zeno’s paradoxes, never reaching our desired destination of satisfaction.

“I lack nothing” is not an encouragement of the “gimme, gimme, gimme” nature we all possess, but rather an appeal for us to move from greed to gratitude. It is an invitation to shift from wanting more and more to being thankful for what we have. And, most importantly, “I lack nothing” challenges us to transform our perception of the things and opportunities we receive from what we deserve and earn to gifts of God to be used and shared for the sake of God’s name.

“I lack nothing” could be perverted by a prosperity preacher into promised plenteousness, but that is patently not the poet’s point.

As we shall see as we journey through the Psalm, the Psalmist lives and expresses the real world in which there are unfulfilled desires and disappointments and even death. Dark valleys and evil and enemies abound, but the shepherd is with us in the midst of these terrors. We have everything we need.

We have God. We have each other.

[1] The 23rd Psalm is traditionally attributed to David, but like many Bible authorship issues, that is far from settled among scholars. I’ll primarily be using “the Psalmist” to refer to the poet who composed this psalm. And although we can’t say for sure whether the author was male or female, I will be using masculine pronouns consistently.

I'm an unexpected pastor. Why unexpected? Because no one is more surprised than me that I'm a pastor. See the "About" page on my blog for more info.
View all posts by pastordavesimpson →
This entry was posted in Christianity, Faith and tagged I Shall Not Want, Psalm 23, Psalm 23:1, The 23rd Psalm, The Lord is My Shepherd. Bookmark the permalink.

5 Responses to The Lord Is My Shepherd, I Lack Nothing