Noah, the Film: A Rant, a Review, and a Recommendation

Posted on March 31, 2014 by pastordavesimpson

Justice and mercy. Those are the big themes of the new Darren Aronofsky version of Noah that opened to huge ticket sales and significant controversy this weekend. In the midst of big-budget CGI effects – supposedly the most complex ever produced by George Lucas’s Industrial Light and Magic – justice and mercy are explored in the character of Noah . . . and in the nature of God.

You might be surprised to read anything about God in reference to this film. The usual Christian purveyors of pique (Wal Mart won’t say “Merry Christmas” to meeeee!) have been spreading the word to their faithful followers (donors) that God is not present in Noah. That is poppycock (this is mostly a family blog, so I didn’t use the first word that came to mind). True, the word “God” is never uttered. But there are countless references to “The Creator” that obviously refer to You Know Who.

Saying that Noah is not a movie about God is like saying the Bible Book of Esther is not about God because God’s name is never mentioned. (Trivia Extra – the only other book of the Bible without any reference to God is Song of Songs.) I didn’t count, but I would estimate “The Creator” is referred to, prayed to, cried out to, or otherwise invoked a couple dozen times or more.

As surely as Jacob by the Jabbok River, Noah wrestles with God.  Not physically like Jacob, but certainly his spiritual grappling with God is just as real.  And it’s not just the character of Noah doing the wrestling, but Noah the movie is a barbed-wire-steel-cage match. The contention is not over the existence of God, but about God’s goodness . . . or not. I agree with something my wife Karen said after we saw the film, “I think whoever directed this movie needs to reconsider whether they’re really an atheist.” It is true that Darren Aronofsky has identified himself as an atheist, but he certainly is contending with Something in this film.

The Creator in Noah is not the candy-coated God of Sunday School flannel-board arks. There is nothing wrong with telling stories to children on their level; my daughter’s room was decorated in a Noah’s Ark theme from infancy through Elementary School. But this is a grown-up version of the story, and of God. Sure, the animals are cool and many are cute, but Aronofsky does not shield us from the reality that two of every kind of animal being saved meant that countless other furry critters were drowned. And he makes us especially aware that one family safely on the ark left the rest of humanity clinging to whatever would float – or, in one memorable tableau, the last exposed shards of rocky peaks – in a desperate but fruitless effort to survive. 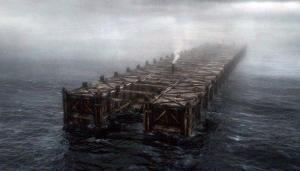 Perhaps the most effective scene in the film occurs soon after the rain has begun and the ark has set sail. Noah and his family eat silently as the screams of the drowning masses reach them from outside the safety of the ark. I sat there in the theater wishing right along with the family in the ark that those shrieking pleas would cease, but knowing silence would mean they had all died.

In the unflinching portrayal of the deadly and destructive consequences of what has come to be called “Noah’s flood,” the film raises this question: What kind of God would unleash such horror on the world, and the creatures, that God has created? Is this “Creator” only about justice, or is there mercy to be found in his character?

Noah (the man) lives out this question. At first, he believes that he and his family have been saved because they are the only good people in a world where everyone else is depraved. It is only just that they be saved while everyone else perishes. But on the ark he realizes that those who have been spared are just as sinful (my word, not Aronofsky’s) as everyone else. At first, Noah takes this to mean that God intends for humanity – including Noah’s potential descendants – to cease after those on the ark finish the job of making sure “innocent” animals survive. Only able to see God’s justice, he is willing to go to extraordinary lengths to make sure that happens. But eventually (I’m trying to write this without spoiling some important plot points) Noah does give in to mercy, and in doing so begins to be aware of the Creator’s mercy.

This business about Noah being less-than-perfect may surprise some folks who have gotten the idea that God spared Noah because he was righteous. But that’s not exactly what the Bible says – it says that Noah found favor with (or received grace from) God and then after that he was blameless or righteous. Like Abraham and other Bible heroes, Noah was an imperfect man called out of God’s graciousness, not because he deserved it. In Christian terms, Noah was a sinner like everyone else, and was only righteous because of God’s action, not his. So I believe Noah gets Noah’s imperfection right, and also hints at God’s graciousness.

Noah is an intensely spiritual film. That being said, it is not a “Christian movie,” something that seems to have upset many earnest Christians (not just the Christian Industrial Complex referenced in the rant). But the story of Noah does not belong only to Christians – it was first, and still is, part of the Hebrew Scriptures. Aronofsky grew up inculcated in Judaism, so it is no surprise that his version of Noah is at its heart a type of Jewish Midrash, with its gap-filling storytelling and earnest grappling with the text.

So Noah does not follow the Biblical texts exactly. That’s a good thing, because if it did we’d only have a fifteen minute or so movie, unless there was lots of time filled with shots of the ark drifting on the waves. The story only takes up three chapters in Genesis. The Bible was not written screen-ready; every Bible movie from The Ten Commandments to Son of God has had to add things that are not specified in Scripture to constitute any kind of a watchable film.

Certainly this Noah is much more faithful to the text than the 1990’s television movie, with its pirate battles and conflation with the Sodom and Gomorrah story which according to the Bible took place at least a thousand years later.

Some of the criticism of Noah has claimed the film has an environmental agenda.  That may be, but the environmental themes do not drown out the depiction of mankind before the flood pretty much as the Bible depicts – doing wanton evil.  In visits to the cities of man, Noah and members of his family find all manners of abuse going on, particularly of women and those who are weak. The film’s embodiment of evil, Tubal Cain, says that he is equal to the Creator because he can give life and take life. The environmental degradation depicted in Noah is more a symptom of man’s depravity than the primary evil.

I’ve written about a thousand words and I haven’t answered the two most basic questions: Did I like it? Should you see it?

There were parts of Noah I liked very much. For the most part, the effects reflected the millions spent on them. Spiritually, I appreciated the depth of the questions raised.  The acting in general was quite good for what in many ways is an action-adventure genre film. Russell Crowe was excellent capturing Noah’s existential struggle. As Charlton Heston is to Moses, Russell Crowe is now to Noah. Jennifer Connelly was a serviceable Mrs. Noah (not named Joan of Ark, unfortunately), and Emma Watson gave a well-rounded performance as Noah’s daughter-in-law.

One unusual addition to the story by Aronofsky I didn’t appreciate at first are the Watchers.  These are stone giants that look, move and sound like cousins of the Ents in the Lord of the Rings series. Apparently they are Aronofsky’s vision of the giants and or Nephilim in Genesis; no one knows exactly what they were like so one can grant him artistic license. They seemed kind of ridiculous, but Aronofsky does use them skillfully in the story and I came to appreciate them when they become a recipient of the Creator’s (God’s) grace in a very surprising and beautiful way.

There were many derivative elements that detracted from my enjoyment of the film. I’m a big fan of Anthony Hopkins, but his Methuselah was so reminiscent of Gandalf that I couldn’t get Ian McKellen’s wizard out of my head when he was onscreen. Ham’s character arc reminded me too much of Edmund in The Lion, the Witch and the Wardrobe.

And then there was Tubal Cain. I’m not sure if it was Ray Winstone’s portrayal or the way the character was written, but I never really bought into his evil. The representation of everything about humanity that deserves destruction should have been more charismatic, more interesting. But all I could think of when Tubal Cain stowed away on the ark was Dr. Smith on the old Lost in Space television show (he stowed away aboard their flying saucer).  Hardly a menacing image.

So the answer to “Did I like it” is . . . mostly. I’m glad I saw it but it is certainly not one of my favorite films ever or even of the past year or so. I am not a big fan of big budget action-adventure movies and there were many elements of those kind of films in Noah.

So, should you see it?

We saw Noah on an Imax-size screen. If you can see it under those conditions, it is certainly worth the time and money. It is an epic film that should be seen in the theater and will definitely lose something on smaller screens.

I also think it is valuable for Christians to go see Noah so they can talk about it with non-Christians.  Unlike movies like Son of God and God’s Not Dead that mostly “preach to the choir,” Noah will be seen by many unChristians. It provides an opportunity not only or even primarily for evangelism, but for just plain conversation with folks who believe something different.

A place to start a discussion might be in the beginning. When Noah and his family are on the ark, Noah says that he will tell them the first story he heard.  It is the story of creation and the fall told, except for a blurring of some of the six days, with great reverence for the Genesis text. The accompanying, ultra-real visuals depict the progress of creation and of life, in a way that leaves ambiguous whether this is happening over a few days or over millions of years. It is a beautiful, and thought-provoking few minutes, well worth viewing and discussing, like a great deal of Noah.

You can read Karen’s review of Noah here.

I'm an unexpected pastor. Why unexpected? Because no one is more surprised than me that I'm a pastor. See the "About" page on my blog for more info.
View all posts by pastordavesimpson →
This entry was posted in Christian Living, Christianity, Movies and tagged christian movie review, christian noah movie, noah anti-christian, noah blasphemy, noah movie. Bookmark the permalink.

9 Responses to Noah, the Film: A Rant, a Review, and a Recommendation