“Look! Here Is Water” – A Sermon about God’s Inclusivity with a Surprise Ending

Posted on May 8, 2017 by pastordavesimpson 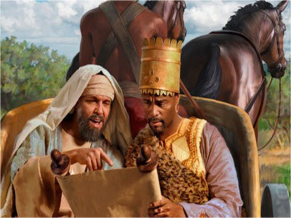 The pivotal moment in today’s Scripture story is when the Ethiopian Official says to Philip, “Look! Here is water! What can stand in the way of my being baptized?”

That’s why Philip was there in the first place. But he didn’t know it.

What a surprise to him! He had been appointed to be a deacon in the earliest church, one of the men who oversaw the feeding of widows and the poor.  An angel told him to get out of town. to go out on that lonely, almost-deserted desert road.  “Get up and go,” the angel had said.

And Philip got up and went.

The writer of Acts tells us that Elias was an official of the Ethiopian Queen, in charge of her entire treasury. He must have been pretty rich because he had a chariot and a driver. AND he had something probably even more expensive at that time when everything had to be written out by hand – a scroll with the book of Isaiah written on it.

He happened to be reading that scroll, and was confused by something Isaiah wrote 400 years before Jesus lived and died about a man who was like a sheep being led to slaughter, an innocent man put to death. So when the Holy Spirit told Philip to run over to the chariot, and Philip asked, “Do you understand what you’re reading?” Elias told him, “No I don’t.”

And Elias asked, “What does this mean? Who is this innocent man who was put to death?”

And that opened the door. Philip shared the good news about Jesus – the Gospel – with  Elias!

And then right at the right time, they came to some water. Right there in the desert.

The Holy Spirit was definitely in charge.

“Look! Here is water! What is to stand in the way of my being baptized?”

Why not baptize Elias? Philip had lots of reasons not to do it . . .

Philip could have said, “Elias you don’t know enough. Five minutes ago you didn’t even know who Jesus was. Maybe if you could take some classes or do some reading, we could schedule the baptism at some point in the future.”

I mean, Elias hadn’t even professed his faith in Jesus as his Lord and Savior! He hadn’t recited the Creed (sure, the Creed hadn’t been written yet but that’s a technicality) or asked Jesus to come into his heart or whatever. “Sorry,” Philip could have said, “You haven’t said the right words. No baptism for you until you get that right.”

I wonder, did Philip think about Elias’ lack of knowledge or his failure to say the right words?

Do you and I let those things get in the way sometimes? Do we put too much stock in what we or somebody else knows or needs to know,  rather than realizing what happens in baptism – even our faith itself – is God’s work not ours?

I’ve heard it in discussions about communion – some of you remember it used to be that young people weren’t able to receive communion until they learned enough in Confirmation. Until they, quote, “understood the sacrament.” But I went to seminary and have a Master of Divinity Degree .

I don’t understand the sacrament. I don’t understand how we can receive the Body and Blood of Jesus along with the bread and the wine. It’s a mystery. If understanding was a requirement for Communion we would never commune developmentally disabled folks or folks with dementia. Thank God it’s not by our knowledge but by God’s grace and God’s action that we receive the benefits of Communion!  And faith itself.

And baptism – if you had to understand baptism we wouldn’t baptize babies. Or anybody else!  Baptism is something God does – God pours out grace, God’s undeserved, unconditional love and forgiveness.

Philip didn’t let Elias’ lack of knowledge or failure to say the right words get in the way of the Holy Spirit.

Here’s another thing Philip could said to Elias that prevented him from being baptized: “Elias! You’re an Ethiopian. You’re from Africa!”

I wonder if Philip hesitated because Elias was African. There probably weren’t any African Christians yet. Was the church for them? Maybe Philip could have said what folks of color sometimes have heard when they visited predominantly white churches. They were “lovingly” told, “Maybe you’d be more comfortable somewhere else.”  Or what white congregations have told clergy of color. “You’re just not right for our church.”

I wonder if Philip was worried about the church losing its identity.. People get nervous when churches get diverse.  Studies have shown that when predominantly white churches reach just ten percent people of color in membership, white folks start leaving. I don’t think that’s the Holy Sprit’s intention.

But Philip didn’t let Elias’ ethnicity get in the way of the Holy Spirit.

Philip could have also answered Elias’ question by saying, “Look at all you have. You’re rich! Jesus said it is easier for a camel to go through the eye of a needle then for a rich man to get into the kingdom of heaven. It’s right there in the Bible. Maybe if you sold some stuff . . .”

Sometimes we use economic status, either too much or too little, to separate us from fellow members of the Body of Christ.

But Philip didn’t let economics get in the way of the Holy Spirit.

Philip also could have answered Elias’ question by saying, “What’s to stand in the way of your being baptized? Just listen to you! There’s something not right about you.”  You see the Ethiopian was a eunuch – he is someone who had been castrated. His voice would have been a higher pitch than most men and he wouldn’t have had any facial hair. He wouldn’t have looked what would have been considered very “manly.”  According to Deuteronomy, if he was a Jew he couldn’t participate fully in Temple worship or offer sacrifices.

Philip could have said, “Look, it says in the Bible people like you don’t belong in the church.”

That would have been a pretty big reason Philip could have used to prevent him from being baptized.

“The Bible says it, and I believe it!”

Elias didn’t conform to the usual expectations of gender – he wasn’t the societally accepted picture of a “real man.” You might be able to understand Philip acting like some Christians even today, when they reject folks whose sexuality or gender are not their idea of  “normal.”

But Philip did not let Elias’ being different get in the way of the Holy Spirit.

Oh, and Philip could have said it was Philip himself that prevented Elias from being baptized. Philip wasn’t a pastor, after all, hadn’t been to seminary and didn’t wear one of these [point at clerical collar]. “Sorry. You’ll have to find someone else more qualified.” I can imagine what the Elias’ reaction would have been, [looking around] “Out here in the desert??”

Now of course in the Lutheran church it is Pastors who usually baptize. But that’s not because pastor’s have any special power (I wish I did). Baptism is a precious gift that has been entrusted to the church, and USUALLY pastors baptize so that gift is handled carefully and correctly. But even in our church, in an emergency, anyone can baptize and it will “work.”  I guess Philip could have told Elias to wait for someone more qualified.

But Philip didn’t let rules and policies stand in the way of the Holy Spirit.

The answer to Elias’ question, “What can stand in the way of my being baptized? “was . . .

Plenty. There were many reasons Philip could have cited to say, “Not now. Not here. Not you.”

But Philip baptized him . . . anyway.

I am actually more impressed with what Philip did before the baptism. You know, telling Elias the Good News about Jesus. Any of those reasons not to baptize Elias might have seemed like good reasons not even to share the Gospel with him. This dude was definitely different, and I’m sure Philip’s church buddies would have understood if he had just moved on.

The good news was for Elias!

But I have something more important to tell you today.

Each of us is Elias.

There are reasons for God not to love us and to claim us as God’s own. There are things we’ve done and things we’ve failed to do. Ways that we are.

But God claimed us anyway. None of those reasons count. In the waters of baptism God poured out grace – unconditional, undeserved love and forgiveness.

What Paul writes in Romans 8 is the truth – NOTHING can separate us from the love of God.

But what if you’re not baptized?

I know it’s not the usual way we do things, but I can’t preach this sermon about Philip and Elias without saying,  “Here is water, what is to get in the way of you being baptized?” So if you have never been baptized, never experienced the outpouring of God’s love in that way, I want to invite you to come up, and we’ll do it right now.

There is nothing to stand in the way of your being baptized.

At the early service, no one came up to be baptized. But right after the service, one of our Confirmation students brought a friend to my office. The friend asked if we could schedule a baptism when her parents could be there.

And here’s the surprise ending – At the later service, someone did respond to the invitation to be baptized. In a highlight of my ten years of ministry, we baptized that gentleman right then and there . . . There was water. There was nothing to stand in the way of his being baptized.

Later, he joined 21 other folks at the first session of our New Member class.

(Preached at Christ Evangelical Lutheran Church of Millersville, May 7, 2017. You can hear the early service version of this sermon here.)

I'm an unexpected pastor. Why unexpected? Because no one is more surprised than me that I'm a pastor. See the "About" page on my blog for more info.
View all posts by pastordavesimpson →
This entry was posted in Bible, Christian Living, Christianity, Christianity and Culture, Lutheran Theology, Sermon, The Holy Spirit and tagged Acts 8:26-39, Baptism, Grace, Philip and the Ethiopian, Sermon on Acts 8:26-39. Bookmark the permalink.

5 Responses to “Look! Here Is Water” – A Sermon about God’s Inclusivity with a Surprise Ending