Some Rhetorical Questions about Love, Foot Washing, and Gaydar

Posted on March 17, 2014 by pastordavesimpson 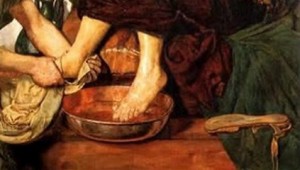 Questions for the day:  If proposed legislation passes that would “protect” Christian businesses from having to serve gay folks, how will those Christians know who is gay and who is not?  Where exactly is gaydar on those lists of gifts of the Spirit in either Romans or I Corninthians?

Undaunted by their defeat in Arizona, some Christians are pushing laws in other states that would allow discrimination for religious reasons.  This is not just a “gay issue;” there is no enumeration in some of these laws of who could be excluded on religious grounds.  I suppose Christian businesses could refuse to serve those who live together without being married, unwed mothers, people with tattoos, men with long hair, women with short hair or wearing jewelry, and on and on.

Here’s another pair of questions:  Aren’t we Christians called to serve our neighbor? And wasn’t Jesus’ point in the parable of the Good Samaritan that our neighbor is well, everyone?

I’ve been pondering this over the past few days as I prepared a sermon about Jesus washing the feet of his disciples in John 13.  This story amazes me, that Jesus – the Son of God – would stoop down and clean the stinking, filthy feet of his followers.  That God in human flesh would take on the role of a servant – or a slave! – for that motley band who had followed him for three years but still had no real idea what he was all about, and who would desert him (and deny even knowing him) when he was arrested in just a few hours.

I am blown away by the moment when Jesus stoops down at Judas’ feet.  The King of the Universe pours water over the feet of the traitor, and then wipes away the mud and the muck and the filth from the feet of the one who would soon turn Jesus over to those who wanted him dead . . . with a kiss.  Jesus served in just about the most humiliating way possible this man who, John tells us, Jesus knew is doing the work of Satan.

Another question: Isn’t this scene of self-abasing service a picture of the radical love of Jesus, a love that embraces and serves those who oppose and differ from us?

And a real-world question: When we Christians make our “rights” our focus, when we try to use the power of the world rather than the power of love, aren’t we are playing the game Judas – and by proxy, Satan – played?  Judas/Satan enlisted the powers of the world – the religious leaders, the might of the Roman empire.  Jesus responded with . . . love and service.

It seems to me that if we Christians are going to love as Jesus loved, then no matter how we feel about gay folks – or anyone else who is “different” –instead of seeking a legal mandate to exclude “them,” we would be going out of our way to serve especially those who act or believe differently.

A final question: Wouldn’t it be awesome if Christians were known more for how we serve (love) without limits rather than who we seek to exclude?

I'm an unexpected pastor. Why unexpected? Because no one is more surprised than me that I'm a pastor. See the "About" page on my blog for more info.
View all posts by pastordavesimpson →
This entry was posted in Christian Living, Christianity, Homosexuality and tagged Arizona gay discrimination law, footwashing, jesus washing judas' feet, john 13. Bookmark the permalink.

8 Responses to Some Rhetorical Questions about Love, Foot Washing, and Gaydar