Posted on March 10, 2014 by pastordavesimpson 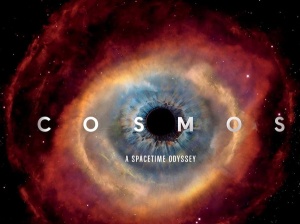 Apparently some Christians are outraged about the reboot of “Cosmos” that premiered last night on Fox (and several Fox-affiliated networks).  Here are some actual tweets:

“Wow, and they (think) believing in God is insane? Takes more “faith” to believe what I just watched.”

“Apparently #cosmos can just lie on TV. The moon was actually created by God. As was life. So yeah we do know where life came from.”

“Can’t stand all the #blasphemy this Cosmos show is spreading.”

I watched all sixty minutes last night, and I missed the blasphemy.  What I saw was an awesome explication of the first two verses of Psalm 119:

1 The heavens declare the glory of God;
the skies proclaim the work of his hands.
2 Day after day they pour forth speech;
night after night they display knowledge.

Or was it inspired by one of my favorite worship songs, “God of Wonders”?

God of wonders beyond our galaxy
You are Holy, Holy
The universe declares your Majesty
And you are holy holy

Probably not, because the folks behind “Cosmos” – Astrophysicist/Host Neil Degrasse Tyson, writer Anne Druyan (Carl Sagan’s widow), and Executive Producer Seth MacFarlane (yes, the “Family Guy” guy) – identify themselves as atheists or agnostics.  But that doesn’t mean “Cosmos” was anti-God.  For Christians, science does not have to separate us from God but can instead increase our sense of awe at God’s infinite creativity and power.  That’s what a show like “Cosmos” does for me, anyway.

When Tyson took off in his sleek “Spaceship of the Imagination” for a tour of the universe, I was swept up in the majesty of creation.  A combination of real images and blockbuster-quality CGI illustrated Tyson’s explanation of our planet’s address in broader and broader terms – first in the solar system, then in our galaxy, then in our cluster of galaxies and finally in the universe.  “God of wonders” indeed!

Perhaps the most potentially disturbing part of the program for Christians was a long animated section devoted to the story of Giordano Bruno, a Dominican Friar burned at the stake 400 years ago by the Roman Catholic Church.  “Cosmos” focused on Bruno because of his belief that the universe is infinite, and that the earth is not at the center of it. Tyson pointed out that not only did the Pope reject Bruno’s ideas, but also John Calvin and Martin Luther.

BUT, Bruno’s model of the universe was not what got him killed.  It was primarily because of other heresies – rejection of the Trinity, etc.- that he was put to death.  Tyson did mention that, but just in passing; it would have been easy to get the impression that Bruno was killed by the church solely because of his cosmology.

At least I think so.  I was somewhat distracted by the cartoon-Bruno’s resemblance to George Harrison.  Am I right? 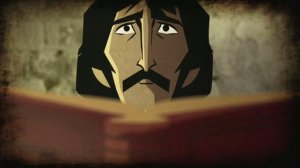 If anything, “Cosmos” was anti-religion, or more exactly anti-religion-that-denies-science-in-the-name-of-God.  That’s not necessarily a bad thing, but it would have been nice if they had mentioned that the same Roman Catholic Church that was so resistant to science 400 years ago today officially says that there is no conflict between the Bible and evolution.  Not to mention we Lutherans have advanced beyond Martin Luther’s small-mindedness when it comes to a large universe.

In the last part of the “Cosmos” premier, Tyson described the 13 million years since the Big Bang as if all that time were just a year.  It was quite a humbling perspective – earth didn’t form until “September,” life did not exist until “October,” and all of recorded history happened in the last 14 seconds!

So this first episode of the new “Cosmos” began by showing how small the earth is compared to the great scale of the universe, and ended by illustrating what a tiny piece of time we humans have been writing things down.

Does that in any way challenge my belief in God?  Certainly not!  Science is concerned with the “how” not the “Who.”  Scientific investigation of the universe and its origins no more threaten my faith that God is the ultimate Creator than understanding fetal development shakes my belief that I (and everyone else) was “knitted together in my mother’s womb . . . fearfully and wonderfully made” by that same Creator (Psalm 139).

What would I say to those who feel threatened by something like “Cosmos?”  Maybe I’d say what Giordano Bruno shouted (at least in the “Cosmos” portrayal) at his church trial – “Your God is too small!”

And as Neil Degrasse Tyson said about Bruno, “The God he worshiped was infinite.  Why would his creation be anything less?”

I know Tyson is an agnostic, but “Amen” anyway!

If you want to check out the first episode of “Cosmos,” it will be rebroadcast tonight on Nat Geo Wild.  It’s also available on Hulu.

I'm an unexpected pastor. Why unexpected? Because no one is more surprised than me that I'm a pastor. See the "About" page on my blog for more info.
View all posts by pastordavesimpson →
This entry was posted in Christian Living, Christianity, Faith and Science and tagged Cosmos, Cosmos and Christianity, Cosmos and Faith, Cosmos: A Spacetime Odyssey, Neil Degrasse Tyson. Bookmark the permalink.

7 Responses to Finding God in “Cosmos”