Posted on February 17, 2012 by pastordavesimpson 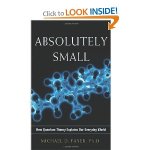 I am intrigued by quantum physics.  I don’t get all the math, but just trying to grasp the mysterious properties of matter in its infinitesimally smallest bits keeps me transfixed.

Right now, among the other books I’m reading is Absolutely Small: How Quantum Theory Explains the Everyday World, so far a wonderful introduction to the strange world of quantum phenomena.

Does learning about science – especially quantum science – challenge my faith?  Not at all.

Here are some big – and small – numbers I found researching a sermon a while back:

A German computer recently estimated that there are 500 BILLION galaxies in the universe.  And scientists estimate there are 1 SEPTILLION stars in the universe – that’s a one with 24 zeroes.  That’s a lot bigger than even the national debt!  Can you imagine a God that created every one?  A God that keeps track of every one?

God is the God of the unimaginably big.

But God doesn’t just keep track of those stars as whole units – God keeps track of each atom from which they are made.  And God knows every time two hydrogen atoms join to become a helium atom to power those stars.  Every SECOND, just our sun converts over 500 TONS of hydrogen atoms to helium.  Multiply that by 1 septillion . . . that’s lots of helium atoms created per second in the universe.  And God is aware of every one.

God is the God of the infinitesimally small.

And speaking of how God is the God of the infinitesimally small, your body is made up of more atoms than there are stars in the universe.  About 7 octillion (that’s a 7 with 27 zeroes if you’re keeping score at home).

And you are one of about 7 billion people on the earth, and the earth is a pretty nondescript planet in the outer corner of our galaxy, in the midst of billions of other galaxies in the universe.  You think about all those atoms and all those stars and all those people and you could feel pretty insignificant, couldn’t you?

With God creating and keeping track of all that unimaginably big stuff and all that infinitesimally small stuff, how important could we individual human beings be?

How important could you be?

That’s why this science stuff doesn’t lessen my appreciation or awe of God.  I praise God all the more,  Seven octillion atoms! I am, in the words of that Psalm, “Fearfully and wonderfully made.”

And so are you.

I'm an unexpected pastor. Why unexpected? Because no one is more surprised than me that I'm a pastor. See the "About" page on my blog for more info.
View all posts by pastordavesimpson →
This entry was posted in Faith and Science, Psalm 139, Quantum Physics and tagged Atoms, Fearfully and Wonderfully Made, Fusion, Galaxy, Gold, Universe. Bookmark the permalink.