Posted on April 14, 2017 by pastordavesimpson 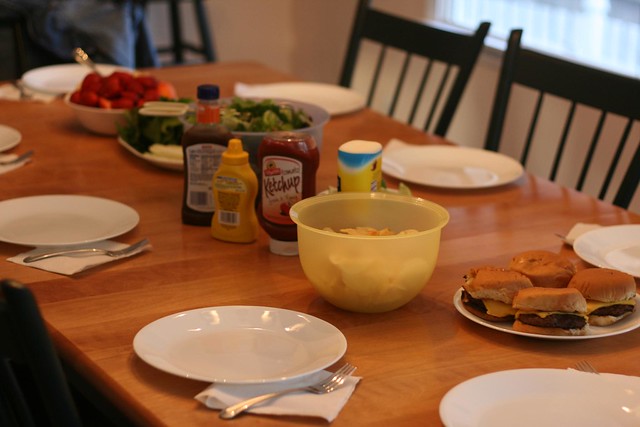 There is something powerful about sharing a meal.

According to surveys, more families are eating together. The National Center on Addiction and Substance Abuse conducted a survey and found that almost 60% of families with children under 18 report eating dinner together at least five times a week – that’s up from only 47% 20 years ago.

And that’s a good thing. According to the Family Dinner Project, children in families that regular share meals have:

Yes, there is something powerful about sharing a meal.

Growing up, I remember my family gathered around the table sharing how our day went, our successes, our failures, our concerns. Sometimes arguments broke out (usually between me and my sister or me), but we learned how to resolve our differences. After all, if we had to get along if we wanted to eat.

Big news got shared at family suppers. I still clearly remember the supper when I was 12 and my father waited until dessert to tell us we were leaving Virginia and moving to Florida that summer. There were questions and tears and reassurances.

Food is a big part of the life of a church family. We just finished 6 weeks of Soup and Bread Suppers. We gather for Men’s Breakfasts and Lunch Bunch lunches and fellowship time after worship all summer. Most funerals include a bereavement meal where folks eat and remember together.  If we want to celebrate something or honor someone, what do we do? We eat!

There is something powerful about gathering and eating together.

Like the host of one of those food shows on the Travel network, Jesus eats his way around Israel through the Gospel of Luke. Luke tells us about 10 times Jesus shares food with others – two of them after the resurrection (breaking bread with Cleopas and his friend on the road to Emmaus and later eating fish with his disciples).

The eight times Luke reports about Jesus eating before his death and resurrection always find Jesus gathered with others. Often what Jesus says at these meals is significant, and once the meal itself is a miracle (the feeding of the 5000), but what is remarkable about most of these gatherings is with whom Jesus chooses to eat.

The first meal in Luke is a banquet at the home of Levi, a tax collector also known as Matthew. The religious leaders are outraged that Jesus would eat at the home of such a person, and with Levi’s friends, who are also “tax collectors and sinners.”

Later, Jesus eats with “respectable” people at the home of a Pharisee, but he scandalizes them by allowing a woman Luke tells us has lived a sinful life to anoint his feet with her tears and perfume before wiping them with her hair.

Just a couple weeks ago Pastor Nicki preached about another dinner that raised the eyebrows of the folks who thought they were righteous – out of all the people who lined the streets to see Jesus in Jericho, he picked the tax collector in a tree, Nicodemus, to host him for dinner.

It seems Jesus will eat with ANYBODY. Jesus turns meals into not just scandalous but subversive acts. He challenges the conventions about who is worthy and who is unworthy, who is righteous and who is a sinner, who is in and who is out, just by reclining at the table with disreputable characters.

Tonight we remember Jesus’ last meal before his crucifixion, the ritual Passover meal we call, appropriately enough, the Last Supper. What a rag-tag group of folks gathered with Jesus in the upper room that evening. Not only tax collector Matthew but political revolutionary Simon the Zealot. There were the hotheads James and John. As far as we know, none of them were especially educated or wealthy or in any other way what the world considered successful. In fact they were probably looked at as quite the opposite, having given up everything to follow the itinerant rabbi.

But they didn’t get it, not even after receiving the bread and the wine, Jesus’ body and blood. Instead of pondering what it all meant, they would argue about which of them was the greatest.

Jesus knew they kept missing the point, and that they would all desert him later that evening. Yet they were all invited and included.

Peter was there. Peter whose impulsivity caused him to do and say embarrassing things. Peter who Jesus knew would deny even knowing Jesus a few hours later. He was invited, and included.

As was even Judas. We don’t know anything about Judas’ life before he met Jesus. We do know that he was a thief – John tells us he stole from their communal funds. And we also know that he would betray Jesus on that very night.

Jesus knew it, too.

Jesus – and the Gospel writers – make it clear Jesus knew Judas was going to betray him.  That shows us that Jesus knew exactly what was going to happen to him, that he was not surprised but walked willingly to the Cross. But it also shows us the kind of table fellowship Jesus practiced throughout his life he maintained even at the Last Supper.

If anyone ever deserved to be re-accomodated – that’s forcibly removed in United Airlines Speak – from the dinner table, it was Judas.

But he was right there, when Jesus broke the bread, and blessed it, and shared it.

What must Judas have thought when he heard that? What must he have felt when the bread came around to him and he ate it.

And Judas was right there when Jesus took the cup and said, “This cup is the new covenant in my blood, which is poured out for YOU.” According to Luke Jesus went on, “But the hand of him who is going to betray me is with mine on the table. 22 The Son of Man will go as it has been decreed. But woe to that man who betrays him!”

What must Judas have thought and felt then, knowing that Jesus knew what he was about to do. And yet Judas still drank the wine. He was still included.

There are times when we may not feel you deserve Jesus’ invitation. We may never feel worthy.

But that’s why Jesus invites and includes us. That’s why he invited the tax collectors and the sinners and the betrayers and the deniers and deserters.

Because they – and we – need Him. We need the forgiveness we receive in this meal. We need to remember what he did for us. We need each other – to gather around the table, around the altar, together.

And we need to remember that Jesus invites everyone, no exceptions.

Finally, we need the glimpse of the future this meal provides. Holy Communion is “a foretaste of the feast to come,” a hint of the eternal feast Jesus invites all of us – and everyone – to share.

Yes, there is something powerful about sharing a meal.

(NOTE: Theologians, and even perhaps the Gospel accounts, differ over whether Judas participated in the sharing of bread and wine at the Last Supper. Luke’s version, upon which this sermon is based, seems to indicate that he did. As the sermon makes clear, that is my supposition as well.)

I'm an unexpected pastor. Why unexpected? Because no one is more surprised than me that I'm a pastor. See the "About" page on my blog for more info.
View all posts by pastordavesimpson →
This entry was posted in Bible, Christianity, Sermon, Uncategorized and tagged Jesus eating in Luke, Judas at the Last Supper, Luke 22:1-27, Maundy Thursday sermon, Peter at the Last Supper. Bookmark the permalink.

3 Responses to “Family Dinner” – A Sermon for Maundy Thursday