An Intersection, a Truck, and the Randomness of the Universe (and God, too)

Posted on December 5, 2016 by pastordavesimpson 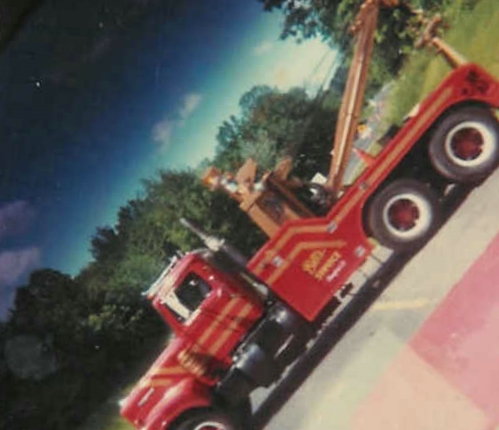 I’m waiting to turn left at a long red light. There are two left turn lanes; I’m in the one on the right. A grey van is on my left. It’s not pulled all the way up, so I can see the oncoming traffic. Midnight Oil’s “Beds are Burning” blares from my radio tuned to the First Wave satellite channel. I’m thinking about what I need to do the rest of the afternoon, and about the sermon I just started writing at Panera Bread.

I pull forward. The van stays a little behind.

I’m always in a hurry to get where I’m going. Usually I would hit the gas and get moving. But I have seen the aftermath of shattering crashes at this intersection. So I wait a beat.

A mammoth red tow truck barrels toward the intersection from the left. I can’t tell for sure if it’s slowing down. The van beside me pulls forward. He must think it’s safe.

I start.  The van stops, and so do I – again I am just ahead and my view is not blocked.

The red truck makes it to the intersection. He’s not stopping! There’s not even a tap on the brakes.

It registers that the van was moving again. My only thought is “Van! Stop!”

The truck roars through, at least 50 miles per hour, the driver oblivious even to my horn’s long fruitless bleat.

If I hadn’t seen the accidents before, I would have hit the gas immediately.

But I had seen them, and I waited.

If the van had pulled all the way up to the line next to me, my view would have been blocked and I probably would have gone ahead when the light changed. Would I have been able to stop in time?

But the van stayed just behind, just enough for me to see the oncoming danger.

Often I drive like I go through a lot of my life, on absent-minded auto-pilot, lost in thought.

But this time I was alert.

I punch my arm to make sure I didn’t die in a crash and am now living in a post-death dream.

God, you must still have work for me to do.
You’re not done with me yet.
I’m not done.
Thank you.
The time will come when I’m not paying attention.
When the van does pull up and blocks my view.
When it’s too late to brake.
Either literally or figuratively.
Like everybody, I’m booked for a limited engagement.
My run may be periodically extended.
But someday my show is going to close.
The sets will be struck, my costumes and props will be trashed or auctioned.
But not today – at least not yet.
Thank you God for the most precious gift of all.
Time.

So I go to post this on Facebook with a reminder to look both ways before proceeding after a red light.

But the first thing I see is this:

Someone has posted a note they got from the principal of their kids’ school this morning. Two other kids got killed and two more injured in an auto accident at an intersection.

I’m a pastor. My degree says I am a “Master of Divinity.”

But don’t ask me to explain that.

Of course the two incidents are not related. I don’t know the kids or their families. We are separated by hundreds of miles and only connect in some Facebook Venn diagram of random acquaintance.

I ask myself (and God?) why some middle-aged pastor is spared while two kids are not.

There is no answer, or more exactly no explanation. God’s only response is the one Job got, “Where were you when I created the universe,” etc.  Or the one spoken by Isaiah, “God’s ways are not our ways” and so on.

This is of course inadequate. But it is also the wrong way to proceed.

God is not some cosmic puppeteer pulling our strings or even a divine director guiding us through some tragic script.

I shared this story with a group of folks, and one of them said, “You don’t know what those kids had done. Maybe they had done something really bad.”

If that’s the way the world worked, then I would have gotten flattened by that truck long ago.

And so would you.

One more thing God is not – a celestial death panel.  Father, Son, and Holy Spirit do not convene and decide who deserves to live and who will be deprived of transcendental life support.

Everyone suffers. Some of it is self-inflicted, some intentionally imposed, but some suffering just seems random.

And maybe it is.

God is certainly in control, but in God’s sovereignty is the provision for free will.

At the sub-atomic level that makes up everything – including us – there is uncertainly and yes randomness.

These things do not destroy or even threaten my faith. They do not speak of the absence of God or the impotence of God, but rather of the way God chooses to deal with the universe.

In spite of the many mistakes I’ve made, the way I’ve used my free will to squander much of the time I’ve been given, in the randomness of this messed-up world where kids on their way to school die in car crashes and middle aged pastors live another day, God has been there.

God has been here.

God was with me when I stopped short of being crushed by a tow truck.

God will be with me the day when I don’t stop in time.

It is not blasphemy to acknowledge the fickleness and especially the impermanence of life in this world.

But I will not face that on my own.

In a world filled with variability, God is the Constant.

God is my Constant.

I'm an unexpected pastor. Why unexpected? Because no one is more surprised than me that I'm a pastor. See the "About" page on my blog for more info.
View all posts by pastordavesimpson →
This entry was posted in Christianity, Faith, Questions and tagged Isaiah 55:8, Job, Nature of God, Randomness. Bookmark the permalink.

1 Response to An Intersection, a Truck, and the Randomness of the Universe (and God, too)