Posted on December 29, 2015 by pastordavesimpson 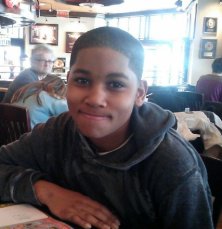 I am complicit in your death, Tamir, and in the life-negating injustice which followed.

I have never feared for my children’s safety in the presence of police officers.

But police officers gunned you down as you played with a pellet gun in a park.

I have never doubted that, if injured, my children would receive immediate aid from those whose vocation it is to protect them.

Yet you languished and anguished four minutes as your lifeblood drained before anyone came to your aid.

I have been taught in classrooms and by experience that my children would receive justice should they be victims of injustice.

Your family has been denied justice. A grand jury, guided by a prosecutor who acted more like a defense attorney for those who killed you,  has decided not to even bring your case to trial.

There will never be a public airing of what occurred, only the behind-closed-doors chicanery of the past months. The public has only heard the selective release of information favorable to the prosecutor’s apparent desired outcome.

And yet we fail to understand why people of color do not trust the “justice” system.

That prosecutor was supposed to be the people’s representative – your advocate – but the combination of the color of your skin and your class and your gender rendered you invisible and of no account.

“Justice delayed is justice denied,” yet your family has waited 11 months for this unconscionable injustice.

I would not have waited patiently; to wait so long for justice for one of my children would have been completely contrary to my expectations.

I would have cried out, gone to the press, called public officials, demanded speedy justice for my child.

I would have been perceived as a grieved and aggrieved parent, righteously angry.

But when your parents cried out, the prosecutor implied they were only looking for a payout. His accusation echoed the repugnant views of my slaveholder forebears, who ripped children from their parents for profit, justifying the separation by denying sub-human slaves could have real parental affection for their offspring.

In the same way we have dehumanized you, the latest in a line of males of color lying in their own blood, denied the justice for which that blood cries out. Those who died before you were described in animalistic terms, their rage beyond the bounds of white reason.

Although the authorities have no problem apprehending white mass murderers alive, lethal force was required to bring you down, a 12-year old with a pellet gun.  You were described as “big for your age” so of course you must be gunned down; a large black male is most certainly a danger to orderly white society.

Tamir, we are scared. We are scared because we see our white domination of the system slipping away. We are terrified to hear that in the foreseeable future we white folks will not be the majority in “our” country. Our power and our place are threatened, and even though statistics tell us we are safer from violence than we ever have been, the fact that we will  soon be outnumbered by  the “other” causes us to tremble.

We will use our power structures to keep those “others” in their place as long as we can, desperately clinging to a white world that is no more.

We will continue our destructive, quixotic quest to “take our country back” from those “others” we perceive as threats.

Although I vehemently disagree with this course, I am convicted by the very fact of my ethnicity and my gender and my socio-economic status. I have benefited from this system. I am assured there is justice for me and for my children.

As long as justice is denied to you, Tamir, I am convicted and I am complicit. As my Savior commands, I put myself in your place and in the place of your parents. And I rage. And I lament.

But neither my compassion nor my confession will restore you or your family to wholeness.

Although this system bestows upon me place and power, I am ultimately powerless. For that system to which I am bound has failed you, and your family, and ultimately, all of us.

I'm an unexpected pastor. Why unexpected? Because no one is more surprised than me that I'm a pastor. See the "About" page on my blog for more info.
View all posts by pastordavesimpson →
This entry was posted in Christian Living, Christianity, Racism, Uncategorized and tagged cleveland, injustice, take our country back, Tamir Rice, white complicity. Bookmark the permalink.

3 Responses to Tamir: A Confession