Posted on June 22, 2015 by pastordavesimpson 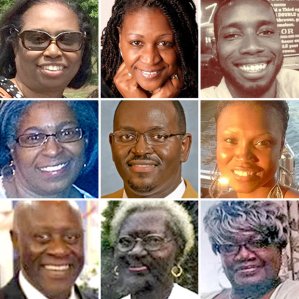 These nine Christians – African-American brothers and sisters – gathered for a Bible Study last Wednesday evening at Mother Emmanuel African Methodist Episcopal Church in Charleston, South Carolina. They were joined by a stranger, a young white man who just listened for the hour they discussed the Gospel of Mark.

But the young man was welcomed. He later told police that he almost didn’t go through with what he was planning because everyone was so nice to him.

But he did go through with it. He murdered those nine folks.

In his Heidelberg Disputation, Martin Luther wrote that a theologian of the cross must call a sin what it is.

So let’s call it what it was – a sinful act of HATE BASED ON RACE.

But let’s be clear – let’s call it what it was. Hate based on race. The perpetrator himself said he went to that particular church to kill black people. This is what he said to his victims before he began his evil deed: “You rape our women, you’re taking over our country, you have to go.”

He has admitted that he killed them simply because they were African-American, not because they were Christians.
He was a Christian, a member of an ELCA church like this one. For us, this is a family matter – not only was the perpetrator an ELCA Lutheran but two of the pastors were educated at the Lutheran Southern Seminary in Columbia, South Carolina.

A few years ago I visited the 16th Street Baptist Church in Birmingham, Alabama. Four girls were murdered there by a KKK bomb in 1963. I remember being deeply moved by church members who were there at the time sharing their recollections of that horrible day. I remember also being thankful for how far we had advanced since then.

But . . .  today we mourn another group of African-American worshippers murdered in their church because of hate.

Hate that is learned.

We, people of God – especially we who have the privilege of choosing to ignore our ethnicity – we need to ponder these questions.

We want desperately to believe racism is a thing of the past, but the Southern Poverty Law Center (which keeps its eye on such things) reports that hate groups have increased by a third in this century – since 2000.

The stench of racism is still here. It is certainly in our churches. Martin Luther King, Jr.’s statement that America is more segregated on Sunday mornings than at any other time is still true. Integrated church staffs would help, but for some white churches an African-American pastor is out of the question. Our previous synod bishop, Bishop Knoche, tells of going to meet with a church council within the past ten years and being told, “We’ll take any pastor you send us . . . as long as it’s not a black pastor.”

But confession begins on an individual level. As your pastor, it begins with me. I confess that some of what I was taught growing up in the south of the 60’s and 70’s still lives inside me. There are times when I have to remind myself that people of color are not, for example, inherently more dangerous than people who look like me.

Worse is my fear –driven silence. There are times when I have stayed silent in the presence of someone who told a race-based so-called joke. I did not laugh, but that is not enough. I did not speak up. I confess I have been with people who have talked in disparaging ways about this or that race, or about people from another country. I have listened to stereotypes about “those people” and I have not spoken up. Silence implies agreement.

When we remain silent, we are part of the sin that is racism. Racism is nothing more than the original sin of PRIDE raising its ugly head. It is the sinful notion that I am better than you, that my group is better than your group. Racism is sin rooted in our disobedience of Jesus’ command to love my neighbor as I love myself.

Are we not called to confront sin? As Martin Luther King, Jr. has been quoted as saying, “If you are not part of the solution, then you are part of the problem.”

As Christ-followers, we must confront our silence. We must not fall into Satan’s trap when we are confronted with this or any other sin and respond, “But those people do the same thing!”

When we are confronted with racism, we immediately get defensive. That’s our human, sinful nature. “The media taught me,” or “If those people didn’t, then I wouldn’t . . .”

Jesus called us to pay attention to the log in our OWN eye. Instead of rationalizing our disobedience and our silence by complaining about what other people are doing or not doing, we are called to ACTION.

What kind of action?

First, to recognize where we fall short.

Second, to speak up and speak out.

Third, to strive for justice, wherever injustice occurs.

And importantly on this Father’s Day, to talk to our children so racism isn’t handed down from generation to generation like a genetic malformation.

The same thing that motivated the perpetrator on Wednesday.

What happened Wednesday in Charleston was a cowardly act of fear bred in lies. It was fear of people who are different. What kind of “courage” does it take to mow down nine unarmed praying people – some of them grandmothers – with a .45 caliber handgun?

We don’t confront racism and prejudice because we are afraid – afraid of losing friends, or of being put down, or of being embarrassed.

But brothers and sisters, we do not have to be afraid! Look at our Scripture for today, Psalm 27. The person who wrote this Psalm had every reason to fear – enemies all around, an army of them!

Trust in God and in God’s promises, and there is no need to fear!  There is no need to hate or to stay in silence in the presence of hate. Sure, it may be uncomfortable, it may even be painful – it apparently was no picnic for the Psalmist but remember the words of assurance Paul write for us in Romans 8 – “For the present sufferings do not compare to the glories about to be revealed!”

That kind of TRUST in God and in God’s promises was proclaimed loud and clear by the families of those who were murdered on Wednesday. Did you see any of the perpetrator’s bail hearing on Friday? Family members of the victims were allowed to speak.  With the emotional wounds so fresh, you would expect cries for retribution and vengeance.

But listen . . . Listen to what TRUST in God sounds like.

Listen to the words of Nadine Collier, daughter of 70-year old Ethel Lance: “You took something precious from me. I will never talk to her again. I will never, ever hold her again.”  She continued through tears. “You hurt me. You hurt a lot of people. But God forgives you and so do I.”

Listen to the words of Anthony Thompson, husband of Myra Thompson. He spoke to the judge regarding the perpetrator.  “I would like him to know that . . . I forgive him and my family forgives him.”  Then Mr. Thompson amazingly expressed concern for the perpetrator’s soul. “We would like him to take this opportunity to repent.” Several other family members made similar invitations of salvation to the man who had murdered their relatives just two days before.

And listen to the words of Wanda Simmons, granddaughter of Daniel Simmons. “Although my grandfather and the other victims died at the hands of hate, this is proof, everyone’s plea for your soul, this is proof that they lived in love and their legacies will live in love. So hate won’t win.”

Hate is rooted in fear.

– A podcast of this sermon is available here

I'm an unexpected pastor. Why unexpected? Because no one is more surprised than me that I'm a pastor. See the "About" page on my blog for more info.
View all posts by pastordavesimpson →
This entry was posted in Bible, Christian Living, Christianity, Racism, Sermon and tagged Charleston shooting, Christians and racism, Church and racism, Mother Emmanuel Church, Psalm 27:1-6. Bookmark the permalink.