Jesus’ Wife Gets a Date

Posted on April 16, 2014 by pastordavesimpson 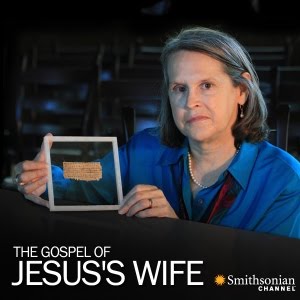 As surely as political attack ads proliferate prior to polling, stories with supposed challenges to Christianity pop up in newspapers and magazines right before Christmas and Easter. One year it’s “The Gospel of Judas,” the next it’s “The Jesus Tomb.” Often there are articles months later that basically say, “We were wrong.” This year, the media’s Easter Basket is filled to overflowing with headlines that imply Jesus was . . .  married!

Just reading these pithy headings gives the impression that it has somehow been confirmed that Jesus was married.  But if you read the articles, you find they are as empty as a hollow chocolate Easter bunny.  The new “proof” is not that Jesus had a wife, but rather the date the “Gospel of Jesus Wife”was written. They’ve determined it’s not a modern forgery.

The testing shows conclusively that it was written as early as . . . several hundred years after Jesus’ death.  Wow. (Please read that “wow” with appropriate sarcasm, as if I was reacting to finding a peanut butter and chocolate candy made by anyone other than Reese’s in my Easter Basket.)

So, several hundred years after Jesus lived, someone wrote that he said something about his wife. But we don’t really know what. 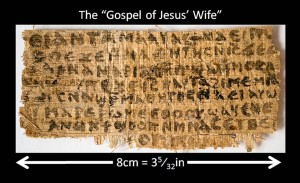 You see, the “Gospel of Jesus Wife,” as impressive as it sounds, is actually a credit-card sized scrap of writing that is totally devoid of any context whatsoever.  At one edge, it says this, “Jesus said to them, ‘My wife . . .” The rest of the sentence is missing because the paper is ripped. Not only do we have no idea if Jesus actually said those words, but we don’t know what he said about “my wife.”

Maybe Jesus was talking about the church, described as “The Bride of Christ” in Scripture. Maybe he was making some other analogy. 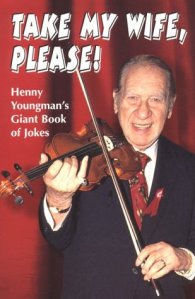 I kind of hope he was making a joke – perhaps he was taking a moment to be a 1st century Henny Youngman; the complete sentence could have been, “My wife, take her please.” Of course Jesus had a sense of humor, and if he did make jokes, would it be so surprising that they would have been repeated centuries later on the Borscht Belt circuit? Jesus was Jewish, after all.

No, I’m not taking this very seriously. It’s really kind of silly, but par for the pre-Christian holiday course in American media.

Don’t get me wrong, I’m not accusing the media of any vast conspiracy to undermine Christianity.  If that’s what they were doing, surely they could come up with something much better than this lame stuff.  They’re just trying to lure readers and web-surfers.

And besides, so what if Jesus was married?

I don’t think Jesus was married because one of the Gospel writers or Paul surely would have mentioned it; but it is possible they didn’t include that information because they just assumed everyone would know that rabbis got married and so Jesus, a rabbi, was married. Also, we don’t know everything about Jesus (John says all the books in the world couldn’t hold everything he did) so maybe that’s one of the things we don’t know.

What we do know is that Jesus never sinned. But getting married is not a sin.  And neither is – hold on to your pantaloons – sex.

Like anything else God created, sex when practiced as God intended (we can disagree about the particulars of that) is good. I think some of our resistance to Jesus being married stems from our puritanical and not necessarily Biblical attitudes about sex, even in marriage.  Paul writes that married people shouldn’t withhold intimacy from each other; we really should give that message equal prominence to the “purity until marriage” preaching.

If we found out Jesus were married, maybe we could let go of some of the paternalism that still pervades parts of the church.  (We need to do that whether or not Jesus was married.) The Roman Catholic Church would certainly have to reconsider that whole celibacy for priests thing, wouldn’t they?

If definitive evidence of Jesus being married was found tomorrow (this Jesus Wife Gospel thing ain’t it), it would not affect my faith one iota.

There’s only one thing that could be found that would challenge my faith – a tomb with Jesus’ body in it. But that’s not going to happen, because Jesus’ tomb was and is empty. Easter happened, and Jesus, whether married or not married, walked out of the tomb and proclaimed victory over death. That victory is my victory.  That victory is your victory.

And that is the Good News I’m holding on to and proclaiming this Holy Week.  The rest is hollow bunnies. 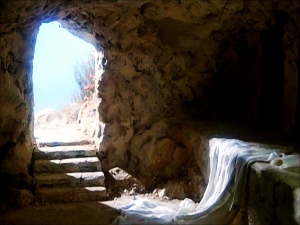 I'm an unexpected pastor. Why unexpected? Because no one is more surprised than me that I'm a pastor. See the "About" page on my blog for more info.
View all posts by pastordavesimpson →
This entry was posted in Bible, Christianity, Uncategorized and tagged Christianity in the Media, Easter, Gospel of Jesus Wife, Jesus Wife, Was Jesus Married?. Bookmark the permalink.

3 Responses to Jesus’ Wife Gets a Date