Posted on May 4, 2012 by pastordavesimpson

For over a month now, it has hurt to eat or talk.  In the very back of my mouth where I had a molar pulled a few years ago, some bone pieces apparently broke off and worked their way to the surface.  After two painful trips to the dentist and one to the oral surgeon, all I could to do was to wait for healing.  I don’t remember what teething pain is like, but it must be something like what I’ve experienced as the bone breaks through my gum (and rubs up against my tongue).

I’ve lost 7 pounds because lots of the time all I feel like eating is oatmeal or soup.  So that’s a good thing at least (although I don’t recommend it as a diet plan).

Now I know this ache compared to the agony that other folks bear is insignificant.  I know I’ve been a whiner, and I  know that it has affected my relationships with others in my family.

This morning my daughter and I had a friction-filled ride to school.  I was frustrated that she was late which made me late, but she was exhausted because it’s Tech Week for the play she’s in and she hasn’t been getting home until after 10 each night.  Let me just say that I was not a model of the spiritual gift of patience.

But my mouth hurt, doggone it!

I’m also leaving today for a weekend Youth Retreat.  As the pastor in a church with no youth ministry worker, I’m planning and leading the retreat.  The 15 kids that are going are awesome, but still . . . the preparation and the execution (maybe not the best word) of the retreat are intensive.   Of course there are also 150 other pastoral things to do, as well as 200 family responsibilities.

But my mouth hurt for more than a month.

So after I dropped off my daughter at school, her almost in tears and me too if I’m honest, I stopped at the WaWa convenience store.  I do that every day.  I get a coffee and say “hi” to the wonderful coffee-lady, Erica.  But today I added something to my coffee purchase . . . a chocolate covered yellow-cake doughnut.

It was a normal sized doughnut, but it was encased in a thick layer of unnaturally solid chocolate.  It was like a double-dip of the chocolate they put on the little chocolate doughnuts that John Belushi used to call “The Breakfast of Champions.”

Who knows how many calories or how much saturated fat that dark sweetened discus had in it, but I didn’t care.

My mouth hurt, you see.  And I was having a bad day.

Of course it hurt to chew that unnaturally solid chocolate.  But I’d been careful about what I ate for a month. I was tired of food choices based on a pyramid of pain.  I ate the whole thing, one painful bite at a time.

When I got home, something about my mouth felt different.  I had been sort of obsessively checking on the bone piece with my tongue – it’s funny how you (or at least I) can’t leave something like that alone.    Now I couldn’t find it.

The unnaturally solid chocolate had knocked that bone piece out of my gum.

I feel so much better.

After Joseph was reunited with his brothers who sold him into slavery (I know that’s quite a jump in topic but stick with me), he remarks on his situation.  He’s now a high official in Egypt, and he can save his family from the famine they are enduring.  This this is what he says, “You intended to harm me, but God intended it for good to accomplish what is now being done, the saving of many lives” (Genesis 50:20, NIV).

God can take our misguided, even evil, intentions and turn them into good.  I wasn’t up to any good with that doughnut this morning; you could say I was being evil to my body. But God used that poor food choice to deliver me from the pain I’ve been suffering.

Again, I know it’s no big miracle.  But I sure do appreciate it. 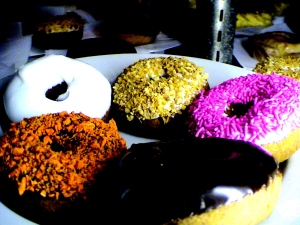 I'm an unexpected pastor. Why unexpected? Because no one is more surprised than me that I'm a pastor. See the "About" page on my blog for more info.
View all posts by pastordavesimpson →
This entry was posted in Christian Living, Christianity and tagged Bone chips in mouth, Dental pain, Doughnut, Healing, Joseph. Bookmark the permalink.